Six months into our relocation to Scotland we were itching to become tourists in our new country. What were we going to do? How were we going to start our adventures of touring Scotland? All good questions. So we went online and started looking at guided tours, bus tours, day tours and overnight tours. We finally settled on a two-day tour of the Highlands departing from Glasgow with Timberbush Tours.

Six months into our relocation to Scotland we were itching to become tourists in our new country.

What were we going to do? How were we going to start our adventures of touring Scotland? All good questions. So we went online and started looking at guided tours, bus tours, day tours and overnight tours. We finally settled on a two-day tour of the Highlands departing from Glasgow with Timberbush Tours.

We settled on a guided tour that took us to and through some of the places we had been looking forward to seeing the most.

The tour picked us up in Glasgow at 10:15 am on a Monday and dropped us off in Edinburgh on Tuesday at around 8:00 pm. From there we went to Waverley Train Station caught the 8:30ish train to Glasgow and then the First bus at 10:14 pm, arriving home at about 11:00 pm. We were tired but extremely satisfied with our rapid-fire adventure.

What did the tour include I hear you ask? Well, an amazing guide by the name of Marty Rose welcomed us aboard the Timberbush tour bus at 10:15 am on Monday and we took our seats on a 16 seat bus and we were on our way.

Day 1 – a visit to the conservation village of Luss nestled on the banks of Loch Lomond, Rannoch Moor, Glencoe, Fort William, Ben Nevis, Loch Ness and Urquhart Castle and arriving in Inverness in the early evening.

Day 2 – starting in Inverness we headed off to visit the Clava Cairns (Burial Cairns of Bulnuaran of Clava), Culloden Battlefield (Cuil Lodhair), taking in the option of a distillery tour at Tomatin Distillery, Aviemore, Pitlochry and finally over the Forth Bridge into Edinburgh. From there it was back home to Glasgow.

The tour of Tomatin Distillery was amazing. We were shown through the distillery and I got to stand in a mash tun, the only place in Scotland where you can do that. We were shown the process by which Whisky is made and shown through a storage area where there was a barrel of Whisky that had been lying in state for 50 years – amazing.

Our tour guide, Marty was a font of information. He gave us a running commentary for the entire two days of the tour.

We learnt that according to the length of his sword (they were made to the measure of the man) William Wallace was apparently 6’7″ (200cm) tall and given his penchant for wearing a green hood and living in the forest, may well have been the factual basis of the tales of Robin Hood. Why is that? Because he had a smaller (little) brother named John and had a personal religious man or friar who accompanied him wherever he went.

We travelled through Glencoe and our guide informed us of the massacre of the MacDonald Clan carried out in 1692. Passed there we went over Rannoch Moor and through an area near Ben Nevis where the World War II Commando’s received their training. Marty informed us that the expression ‘going commando’ was probably coined at this training facility due to the fact that the soldiers trained with live ammunition which may have lead to an accident requiring the burying of their underwear and then dressing again without underwear.

I won’t give you all the details of the tour because you can book one for yourself and enjoy the wondrous landscape and the knowledge of the tour guides. Suffice to say our first true outing as tourists in our new country was one of the most enjoyable experiences of our lives. We are looking forward to more of the same over the coming years of our UK Ancestry Visa. 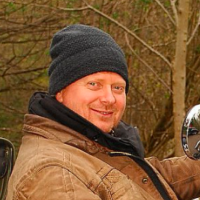 A thought-provoking lifestyle blogger. I am a multi-passionate scatter-brain who thinks about far too many things, like quantum consciousness, philosophical musings and old thought made new. Rather than keep my thoughts to myself, I share them at Timberwolf HQ.

Things I love (…and dislike) about living in Glasgow, Scotland: Pros and Cons
Next Post: Moving countries as a teen: From Australia to Scotland